The RFoV would like to announce in partnership with the Brewer Corporation, that the RVS Cavell Fleet Carrier is days away from finished production. After several weeks of testing, the Drake Class Carrier is nearly at completion, with only the  RFoV’s Holly Trade Platform, needing to be installed.

Edith Louisa Cavell (/ˈkævəl/; 4  December 1865 – 12 October 1915) was a British nurse. She is celebrated for saving the lives of soldiers from both sides without discrimination and in helping some 200 Allied soldiers escape from German-occupied Belgium during the First World War, for which she was arrested. She was accused of treason, found guilty by a court-martial and sentenced to death. Despite international pressure for mercy, she was shot by a German firing squad. Her execution received worldwide condemnation and extensive press coverage.
Credit Wikipedia.

The RVS Cavell, has been commissioned and funded by Director Tiberius Maddox, with the aim of providing Humanitarian support and other trading services to systems and pilots in need. Funding has been put in place to purchase commodities at a price above the galactic, ready for when they are needed in Humanitarian efforts.

The RVS Cavell will also contain all the services and systems need by passing pilots. Why not stop and enjoy a Hank Burger, Buy a New Ship at Honest Al’s, or just Lube up your HardPoints for your onward journey. 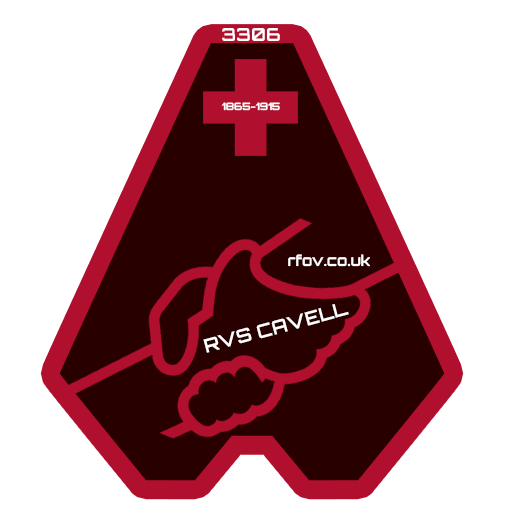