A new year brings new beginnings, a renewed sense of hope, and celebration.

33o7 is no different, and that is why the RFoV Interstellar Brewing Corp have announced a new special edition beer to mark the occasion, available now at Hikenk’s Giles Orbital Star Port.

The “Stand Up for 33o7” Special Edition is named Golden Odyssey, after 2 of it’s main attributes:

In order to ensure enough stock is available, local Fleet Carrier, the RVS Golden Reservoir, has been fitted out with a barrel ageing room – nicknamed The Stellar Cellar.

Come along to Hikenk today, as VP Hank Sweeney will be handing out free samples.

Gold was chosen as it has superior properties to other precious metals. For example, Gold has the heaviest atomic weight of all precious metals, including Silver and Platinum. 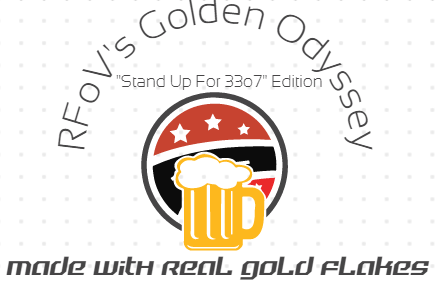