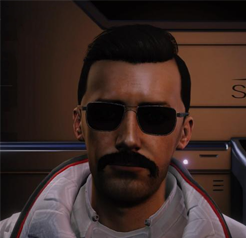 “Sired by a handsome Butcher’s quarry and suckled by a 4-armed Wet Nurse/Busker, Dr. Alan G. Flotsam is a pilot of little repute. He is famed in Voltrigones as a Racontuer, Bon viveur, and the owner of a classically-nurtured moustache. Such is his popularity, Low Dock marketplace hawks the likeness of his face on Mugs, T-shirts and Masks.

When he is not analysing trade data, directing humanitarian aid missions or waxing his moustache, he can be found wrist deep in a rubber key-ed assembly language maelstrom – as he tinkers with Low Dock’s Artificial Intelligence computer, Holly, on his vintage ZX Spectrum.

Antithetically,  Holly manages to be both Artificial and not very Intelligent at the same time.”